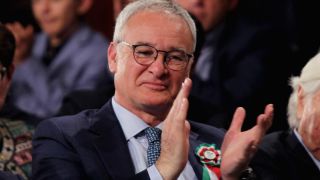 Claudio Ranieri insists Premier League champions Leicester City must "start from scratch" next season but will not rule out bringing more silverware to the King Power Stadium.

Leicester secured an unforgettable title triumph last time around but their fairytale was hit with a harsh dose of reality over the weekend when influential midfielder N'Golo Kante completed a big-money move to Chelsea.

Ranieri will again set his players the baseline target of 40 points to secure top-flight survival but knows Leicester's unexpectedly lofty status opens up a raft of possibilities.

"The basic concept is to start from scratch," he told Gazzetta dello Sport.

"We won the title, it was nice and great, it was perhaps a unique accomplishment, but now we turn the page.

"If at the beginning of last season the bookmakers were quoting 5000-1 on our chances of the title, this time [we must] start from 6000-1.

"The goal to start is the threshold of 40 points for safety. Then, once you hit the finish line, we will raise the bar.

"Finish in the top 10; [qualify for] the Europa League; a place in the Champions League. And maybe win a trophy from the five in which we will play: the Community Shield, Premier League, FA Cup, League Cup and Champions League. The line-up is this. Step by step."

Ranieri knows Leicester's introduction to the Champions League could prove a gruelling experience for a close-knit squad that must be bolstered for an increased workload, but he is keen to see how his players respond to the challenge.

"The Champions League is an exciting experience, but it burns reserves of energy, especially mentally," he said.

"We will have to learn to live with this. You will, in fact, happen to lose a few more game and there you will measure our ability to react. "

Ranieri takes his place among a superstar coaching landscape in England's top flight. He believes compatriot Antonio Conte and Pep Guardiola will be successful in their new roles at Chelsea and Manchester City respectively.

Arguably the greatest source of intrigue is Jose Mourinho's appointment at Manchester United, with the former Chelsea boss set to oversee the Community Shield clash versus Leicester eight months on from a loss at the King Power Stadium that cost him his previous job.

"He may become the new [Alex] Ferguson," Ranieri said. "He will not stay in Manchester 26 years but he will make his mark."

On coming face-to-face with Mourinho so soon after playing a part in altering the course of his career, Ranieri added:  "That's the beauty of football. Our sport is a magnificent container of stories."