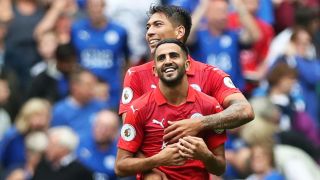 Reports have emerged this week suggesting the Algeria international has agreed a deal to move to Emirates Stadium for a fee of close to £41million.

Mahrez was in fine form in Leicester's 1-1 International Champions Cup clash with Celtic on Saturday, opening the scoring with a sublime solo goal before being applauded from the pitch by both sets of fans in Glasgow for his superb display.

But Ranieri still believes the 25-year-old will be a Leicester player when they kick off their Premier League title defence against Hull City on August 13.

"I'm confident, of course," he said after the match, when asked if he believed Mahrez would stay.

"We know very well there are other teams who must win the Premier League. We just have to defend it.

"I changed him at last because I said 'okay, his job is done, it's better to avoid injury'.

"I'm very happy, we have a very good dressing room. The players who came in are very good."

Leicester captain Wes Morgan was impressed by Mahrez's performance, capped by a dancing run and terrific curling shot that put his side ahead just after half-time.

"That's what he's all about, he can score something out of nothing," said Morgan. "He did that today, it was a great goal and his performance was good today."

Ranieri, whose side triumphed 6-5 on penalties at Celtic Park, was delighted with the application of his players and is relishing further tests in the glamour pre-season tournament against Barcelona and Paris Saint-Germain.

"I'm super happy, we played against a team ahead of us [in preparation] and I didn't see a difference," he said. "We're on the right way for our fitness, our preparation.

"We were so concentrated, had good shape, I'm very happy. Now we have to think about international matches - Barcelona and Paris Saint-Germain play in different styles.

"My players have come back with the same mentality."