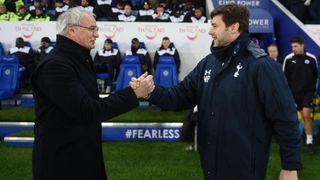 Claudio Ranieri admitted that he was not overly disappointed to see his Leicester City side beaten 2-0 in their FA Cup third-round replay with Tottenham.

Goals either side of half-time from Son Heung-min and Nacer Chadli gave Spurs a comfortable victory at the King Power Stadium on Wednesday.

And Ranieri, whose side sit second in the Premier League on goal difference, said the result enables him to focus fully on continuing their brilliant top-flight campaign.

"The Premier League is our priority, and not the FA Cup," the Italian told the BBC.

"I wanted to use it to see all of my players and I am happy because they all played to their maximum.

"Of course we were frustrated from the first match when we drew at the very end, but tonight Tottenham were very good and they are a really strong side.

"Back in 2000 when I was first came to England they [Tottenham] were starting to build a team for Europe, and we are just starting that journey now, so no, I am not disappointed with the team."