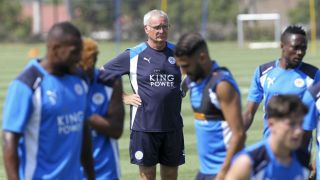 Claudio Ranieri has warned Manchester United he feels something special coming from his Leicester City team ahead of Sunday's Community Shield.

Ranieri and Leicester are no strangers to the extraordinary - having come from nowhere to win the Premier League title last season - and with all eyes on them once again this season as they look to repeat the seemingly impossible, the Italian manager said his team are still capable of the spectacular.

"No less and no more. It is my job to make sure the players have the same hunger.

"I feel something good coming from my players.

"I watch them during the training session and see that. But I want to see them on the pitch. I want to see if they are involved in the project here."

And while Ranieri remains a believer in his special team, he knows he has to continue to play to Leicester's strengths.

"Our strength is not keeping possession. To play how we want it is important to be 100 per cent fit. But we can’t press for 90 minutes against United," he said.

"It is impossible at this moment. So it is now important to be intelligent."

And Leicester's high-pressure football will be even harder to recreate without N'Golo Kante, who has moved to Chelsea, but Ranieri said his team have to find new ways to pressure their opponents into submission.

"There will be a big difference," said Ranieri. "It was like we had an extra player when we had him. If he crossed the ball and then scored with a header, it's normal!

"Now we have to do something different without him."