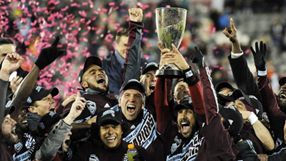 The Rapids will be making its first appearance in the Championship game since 1997 and will face the winner of Sunday's Western Conference final between FC Dallas and hosts LA Galaxy.

Defender Kosuke Kimura scored a rare but fortuitous goal when his intended cross eluded Earthquakes goalie Jon Busch and nestled in the net on 42 minutes.

"I just aimed for a good cross," Kimura told reporters. "I saw Omar (Cummings) and Conor (Casey) inside and I just whipped the ball in. I put it in a good area and no one touched it."

It was just Kimura's third goal in four seasons.

The Rapids were thwarted on a few glorious opportunities by Busch, while at the other end, the Earthquakes shot wide on most of their opportunities as they registered just one attempt on target.

"Sometimes you need a bounce to go your way," said San Jose's Chris Wondolowski, who was off target with a second half-header. "I got it on top of the six-yard line in the middle of the goal. That was horrible. I'll be having nightmares over that."

The MLS Cup will be held in Toronto on November 21.