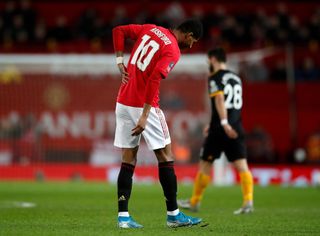 There has been confusion over whether the 22-year-old, who played for just 16 minutes after coming on as a substitute, had already been carrying the injury but Solskjaer denies that was the case.

Speaking at a press conference, Solskjaer said: “He’s not had that injury before, no. He complained a little bit after the last time we played Burnley (on December 28) when he felt it the first time.

“We managed him as well as we could then. He had some days off for treatment, we took him off in some games. He didn’t start every game.

“Then suddenly this was a new injury. He didn’t have any injuries before then.”

There have been suggestions Rashford could be out for at least three months, potentially jeopardising his chances of featuring at Euro 2020 for England.

Solskjaer himself has not given a clear timescale, previously only saying that he expects him to be unable to train for at least six weeks.

Solskjaer said: “He will be out for a while, he’ll get the time he needs to recover. Marcus is good, he’s a positive guy. He knows this is not what he wanted but he is always positive.

“He wants to get back as quickly and safely as possible and we’ll give him that time. When he feels ready, and medically we’ve cleared him, he’ll be back.”

Solskjaer has suggested he could look to bring in cover for Rashford on loan, while a potential deal for Sporting Lisbon midfielder Bruno Fernandes has stalled.

The Norwegian, however, was unwilling to discuss recruitment as he spoke to media ahead of Wednesday’s home clash with Burnley.

He said: “We’re always looking at improving the squad and seeing if there’s anything out there but nothing I can talk about now.”

United’s difficulties this season have been brought into sharp focus following Sunday’s 2-0 loss to Liverpool, which left them 30 points behind their great rivals in the Premier League.

Solskjaer said: “For me now, we’ve lost to Liverpool, a team that you all say are fantastic and we’ve been in the game until the last kick of the ball. And, for me, that’s strides forward.

“Of course we’re disappointed losing the game, we don’t want to be behind them in the league, but there were signs there that we are on the right track, definitely.

“And, for me, now is not the time to speak about recruitment. We’re looking to the next game against Burnley.

United were charged by the Football Association on Tuesday morning for failing to ensure their players “conducted themselves in an orderly manner” at Anfield.

The charge relates to United players surrounding referee Craig Pawson after a Virgil Van Dijk challenge on David De Gea, which was subsequently ruled as a foul by VAR and led to a Roberto Firmino goal being disallowed.

Solskjaer was not critical of his players when told of the charge.

He said: “Maybe I shouldn’t talk too much about that. Let’s get that decision done but… it’s overturned. Our players… I didn’t see… I reacted myself because everybody could see it was a foul.”