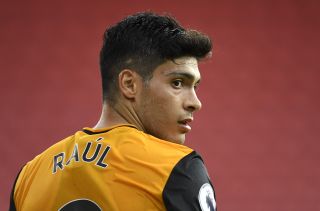 Wolves striker Raul Jimenez insists signing a new contract at Wolves was an easy decision and wants to “make history” after committing to the club until 2024.

The 29-year-old Mexico international has scored 46 times in 106 appearances for the club, including two goals this term.

He initially joined on loan from Benfica in June 2018, with Wolves then exercising the option to sign him on a permanent deal the following summer.

Jimenez said on Wolves’ official website: “I am delighted to be here and to be at this great club. Since I was a little boy, I just wanted to play, I wanted to enjoy it, live it, and that’s why I am here for.

“They give me all the confidence and the opportunity to be an important guy at the front, and that’s what I was looking for when I arrived into Europe, and I’m very happy to continue at this club.

“It didn’t take much persuading! It was easy for me to say yes because since the beginning, this is what I was looking for.

“The last two seasons we have given very good performances, so I knew this club has something special and I’m part of a big family here.

“I think Wolves are getting the best out of me, and I’m giving Wolves my best football, but they are giving the best to me too.”

He also scored 10 times in the Europa League as part of the run to the quarter-finals.

Jimenez added: “I want to make history here and I want to be one of the best strikers, but I have to keep going and keep working hard like I’m always doing. I’m going to have to score more goals.

“We reached seventh place the last two seasons, we got into the Europa League in my first season, but I think we can do better.

“We have to play well and make the fans happy. Being in the top six and a return to the European competitions would be amazing, it’s what we all want, and we are working for that.”