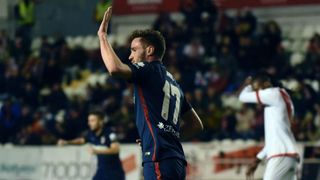 Saul Niguez came off the bench to score his fifth goal of a breakthrough season as La Liga leaders Atletico Madrid were held to a 1-1 draw by neighbours Rayo Vallecano in the first leg of their Copa del Rey last-16 tie.

Rayo have endured considerable suffering in local encounters against the Madrid heavyweights of late - condemned to a 10-2 thrashing at Real Madrid before Christmas and suffering a last gasp-2-0 loss to Atletico at the Estadio de Vallecas last week.

Both sides were much changed as they resumed hostilities at the same venue, although Paco Jemez's hosts played like a team with a point to prove and they deservedly led at the break through Nacho's fabulous opener.

Atletico struggled for clear-cut chances until boss Diego Simeone brought on Luciano Vietto and Saul, and the substitutes combined impressively for the equaliser – the goalscorer offering a muted celebration having spent the 2013-14 campaign on loan at Rayo.

Simeone's men pushed hard for a second away goal during the closing stages, with Vietto denied by the post, but they will enter next week's return leg as firm favourites.

Recent arrivals Augusto Fernandez and Matias Kranevitter made debuts in midfield for Atletico, with centre-back Stefan Savic the only player retained from Saturday's Liga win over Levante.

Thomas Partey came off the bench to score the winner for Atleti on that occasion but sliced his first attempt of this match out for a throw-in.

Rayo forward Miku should have worked Miguel Angel Moya when he blasted into the side-netting in the 17th minute, although the Atletico goalkeeper was called into action shortly afterwards to keep out Nacho's free-kick.

Rayo continue to have the better of the action and Nacho spectacularly beat Moya 10 minutes before half-time.

The full-back reacted quickest to a loose ball 30 yards from goal and produced a sweetly struck low drive that the keeper could only touch into his bottom left corner.

Conceding belatedly stirred Simeone's side, with Juan Carlos making a sharp close-range stop to deny Yannick Ferreira Carrasco before Jose Gimenez headed wide at the back post from the resulting corner.

Atletico resumed with the same intent, although their opponents stood firm and Simeone sent on Saul and Vietto in place of Oliver Torres and Fernandez before the hour.

Manucho sent a header over and the striker then blasted over from the edge of the box as Rayo tried to reassert themselves as an attacking force.

The former Manchester United man lacked the clinical composure that Saul showed in abundance when he hauled Atleti level in the 67th minute, stylishly steering home after Vietto left Nacho prone and picked a perfect cross.

Confronted with further derby heartache, Rayo managed to hold on to parity for next Thursday's return.

They rode their luck as Juan Carlos pushed Vietto's back-post volley onto the upright and Ferreira Carrasco had an attempt scrambled behind at the end of a storming run.