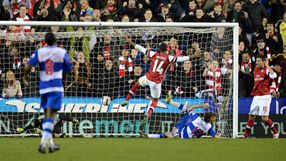 Reading were on the wrong end of a 7-4 scoreline to Portsmouth in the Premier League in 2007 and they also suffered the FA Cup's second heaviest defeat, losing 18-0 to Preston North End in a first round tie in 1894.

Nothing of the sort looked possible though as they flew into a 4-0 lead over Arsenal after 37 minutes at the Majedksi Stadium in the fourth round encounter to leave several away fans shaking their heads in bewilderment as they made for the exit gate.

They missed one of their club's greatest comebacks and one of the most memorable games in the 52-year history of the League Cup.

The 12 goals scored on Tuesday surpassed the record for one match, set in September 2005 when Aston Villa beat Wycombe Wanderers 8-3.

The biggest winning margins were both by 10-0 when West Ham United beat Bury by that score in 1983 and Liverpool beat Fulham by the same margin in 1986.

Liverpool's win over Fulham was in the first leg of a second round tie and Fulham famously printed a picture of the world's then-greatest player Diego Maradona on the front cover of their programme for the return leg.

The message inside read: "Not even he can help us now, but let's enjoy the night."

Reading have now played Arsenal 10 times and lost all 10 matches, with manager Brian McDermott, a former Arsenal player, saying afterwards the defeat was the "worst" of his career.

"It was kamikaze football in the second half and extra time. Even at 5-5 it's extraordinary. It's the worst defeat of my career," said McDermott.

"Obviously it doesn't help that the referee added two minutes on to the four minutes of injury time to make it six. You can't tell the time as wrong as that, but he did," said McDermott.

"At full-time nothing needed to be said to the players. Sometimes the less said the better. We know what happened. This game will be remembered for a long time and that makes me feel a whole lot worse."

Arsenal manager Arsene Wenger said he knew what it felt like to lose a four-goal lead after drawing 4-4 with Newcastle in the league in February 2011.

"I know how it feels to lose a 4-0 lead - it happened to me at Newcastle. I always hoped we could come back. It's strange to explain. At 4-0 you think you have won the game, but at 4-2 the panic starts to set in," said the Frenchman.

"At 4-0 I didn't feel great, I started to think about half-time. Inspiration was not difficult. I just felt sorry for the fans, they stuck with us. A big part stayed and supported us and I give them credit. I give the ones who left less credit.

"Then the miracle happened. There were so many turning points. Our first goal before half-time was important. It's my first 7-5. It was a tennis score."