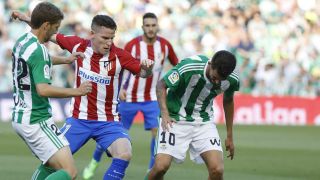 A groggy Atletico Madrid appeared to be suffering from a Champions League hangover as they returned to LaLiga action with a 1-1 draw at Real Betis.

Wednesday's 2-1 victory over Real Madrid was not enough for Diego Simeone's side to reach a third European final in four years as a 3-0 first-leg deficit proved too much to overcome.

Atletico barely laid a glove on their hosts at the Benito Villamarin and Dani Ceballos' thunderbolt had given Betis a deserved lead in the second half.

However, Stefan Savic hit back with a goal as scrappy as Atletico's performance to snatch a share of the spoils that was barely warranted.

Savic fires Atleti level at the Villamarin with his first goal this season in !May 14, 2017

The draw, matched with Sevilla's defeat at Real Madrid, wraps up third place for Simeone's side for a fourth season out of five, but the gap to second has stretched from two points last season to 12, which could worry the Argentine, who is reportedly a target for the Inter job.

Perhaps still struggling to overcome the emotion of Wednesday's disappointment, Atletico turned in one of their most sluggish performances of the season in the first half.

Betis legend Joaquin slammed into the side netting before neatly flicking into the path of Darko Brasanac, who lashed a half-volley across the face of Jan Oblak's goal.

At the other end, attack after attack broke down with a sloppy Atletico pass and the goal of Antonio Adan went entirely untroubled in the first 45 minutes, while visiting frustrations were deepened when stalwart full-back Filipe Luis picked up a booking that rules him out of the final league game at the Vicente Calderon next week.

Betis youngster Ceballos, meanwhile, was at the heart of everything good about the game and was unfortunate to see his swiping effort rebound off the post and drift across the goal line before running out of play.

But he put his name on the score sheet in stunning fashion in the 57th minute when a corner was cleared to Ceballos 25 yards from goal and a first-time volley was too much for Oblak to handle and the Atletico keeper shovelled the ball into the net.

Yannick Carrasco finally drew a save from Adan shortly after the goal, but Simeone saw fit to make changes and introduced Nico Gaitan and Fernando Torres for Kevin Gameiro and Filipe Luis.

Despite the attacking switch, it was a pair of defenders who got Atletico back into the game as Lucas Hernandez flicked Saul Niguez's free-kick into the danger area and Savic prodded home as Betis furiously waited for an offside flag to be raised.

And the home mood was hardly helped as Oblak produced an astonishing stretching save to deny substitute Alvaro Cejudo from eight yards out before somehow punching Rafa Navarro's 35-yard drive between two waiting Betis poachers.

However, there was satisfaction in the air at full-time, as the hosts snapped the three-game losing run that had cost head coach Victor Sanchez his job.