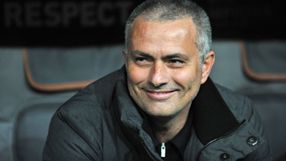 Speaking exclusively to FourFourTwo at the Isokinetic Medical Group International Conference of Sports Rehab and Traumatology at Stamford Bridge, Dr Serratosa was keen to highlight the effect that Mourinho has had on the club as a whole.

And he revealed that the Portuguese manager, who has been linked with a return to former club Chelsea, has told some of his coaching staff that he is looking to stay on at the Santiago Bernabeu.

"When Jose came, we needed stability and he gave it to us," he said. "Thankfully he has said to some of us that he is going to stay next season. He'll be the first manager for a long time to stay for three seasons and I think that's great for the club. Football is very unstable, especially at Real Madrid.

"At the Bernabeu, things are very different – can you imagine if we had lost 5-0 again to Barcelona on Saturday and then got knocked out of the Champions League by Bayern Munich on Wednesday? It will be the end of the world at Real Madrid. Again!"

Despite a reputation as an outspoken, egocentric coach, it is Mourinho's work behind the scenes, with every department at the club, that Dr Serratosa believes sets him part from his rivals.

Now, having spent two seasons working with fitness coach Rui Faria - who has followed Mourinho from Porto, Chelsea and Inter Milan – Dr Serratosa feels much more at ease with his role at the club.

"We've had so many different managers, with every manager bringing his own team of coaching staff. In my time at Madrid, we’ve had 12 or 13 different fitness coaches that I have had to work with!

"A club doctor's biggest challenge is to maintain their position when making a decision about the fitness of a player. We always work under pressure and it’s important to stick to our convictions. Mourinho has been great – he understands how important the medical sides of things are. As a result, the medical support and coaching staff, as well as their relationships with each other, are the best it has been for a while."