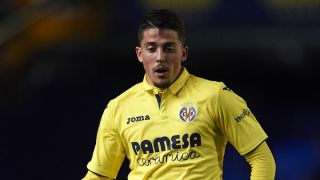 Real Madrid were left shell-shocked by a clever last-gasp Pablo Fornals goal as Villarreal earned a smash-and-grab 1-0 win at the Santiago Bernabeu.

LaLiga's champions largely dominated proceedings on home soil, but Villarreal snatched all three points and a first league victory at Madrid in 18 attempts with three minutes left thanks to Fornals' exquisite chip after Enes Unal's shot was saved.

It compounded a day of utter frustration for an out-of-form Madrid, who felt they twice should have had a penalty in the first half.

Villarreal defender Alvaro Gonzalez was lucky to not face punishment for handball from a Gareth Bale header, while Cristiano Ronaldo was adamant he was fouled by Mario Gaspar on the stroke of half-time.

Referee Alberto Undiano Mallenco was unmoved on both occasions, while Madrid were further frustrated by a poor one-on-one miss by Ronaldo and some good work by Villarreal goalkeeper Sergio Asenjo.

Madrid have now won just once in five LaLiga matches and will be 19 points adrift of Barcelona if their Clasico rivals beat Real Sociedad on Sunday, while Villarreal are just one point adrift of Los Blancos in their bid to muscle in on the top four.

Bale saw a goal ruled out after nodding in from Ronaldo's header back across goal, before Asenjo made a fine stop from Marcelo's rasping 35-yard drive.

He made an even better stop to palm Ronaldo's 25-yard dipping free-kick over the top via the crossbar, before the Portugal captain wastefully dinked over Asenjo and wide of the left post after latching onto Luka Modric's throughball.

Ronaldo went close again shortly after when he hit a stinging drive into the side-netting.

Madrid were unfortunate not to be awarded a penalty 10 minutes before half-time when Bale's header from Toni Kroos' left-wing cross was seemingly handled by Alvaro Gonzalez. And Madrid had more cause for consternation on the stroke of half-time.

Isco's teasing low cross was met by Ronaldo inside the six-yard box and saved brilliantly by Asenjo, but the forward was seemingly clipped by Gaspar when meeting the ball.

Villarreal brought Denis Cheryshev on as a half-time substitute and the former Madrid winger picked Casemiro's pocket before dragging wide from the edge of the box.

A lively start to the half saw Raphael Varane make a crucial intervention from Samu Castillejo's probing pass, while Asenjo was equal to a well-controlled Kroos volley.

Modric saw a 20-yard daisycutter well held by Asenjo, while the Croatia midfielder hit a fierce drive over the top from outside the area with 10 minutes remaining.

And Madrid were made to rue their lack of clinical edge in the 87th minute.

Villarreal launched a lightning counter-attack led by Cheryshev, who slipped in Unal and, although his shot was saved by Keylor Navas, Fornals was on hand to brilliantly clip his shot over the stranded Madrid goalkeeper to spark jubilant scenes on the away bench.