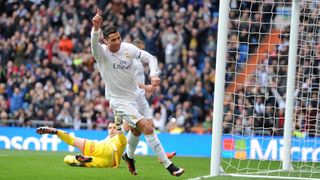 Real Madrid put a difficult week behind them with a thumping 5-1 win over Sporting Gijon at the Santiago Bernabeu on Sunday.

FIFA issued a transfer ban against both Madrid clubs this week over offences related to the signing of young players, but home fans were able to celebrate a stunning display from Zinedine Zidane's side.

Gareth Bale, who scored a hat-trick against Deportivo La Coruna, opened the scoring with a header before Cristiano Ronaldo and Karim Benzema - making his 300th Madrid appearance - struck stunning goals to make it 3-0 after just 12 minutes.

Ronaldo and Benzema added another goal each before the break as the Bernabeu took to singing happy birthday to Alvaro Arbeloa, and Isma Lopez's second-half goal did little to dampen the party mood as Zidane made it two wins from two in La Liga, with an injury to Bale the only real sour note for the home side.

It took Bale just seven minutes to score his fourth goal under Zidane, as he met Toni Kroos' corner almost unchallenged at the near post to glance home a header.

Madrid were pressing well from the off and, after Bale and Isco won back possession in the final third, Benzema flicked the ball into Ronaldo's path and the Portuguese steadied himself before rifling a left-footed shot into the top corner from 18 yards out.

And the home side celebrated a stunning third just three minutes later, as Bale turned provider with a clipped cross from the right which was met by Benzema's brilliant bicycle kick and flew into the bottom corner.

Madrid were rampant and Sporting rattled, and Ronaldo - who lost his Ballon d'Or to Lionel Messi this week - added a fourth after 18 minutes, guiding home Dani Carvajal's low cross with a fine left-footed first-time finish into the far corner.

Benzema came close to finishing a neat move involving Bale and Ronaldo but he did bag his second just before the break. A brilliant flick and lofted pass from Isco gave the France striker time and space to slot home at the near post from 12 yards.

Bale was replaced by Jese Rodriguez at the break after picking up what looked like a calf problem late in the half, and Ronaldo was fortunate not to join him in an early exit after kicking out at Nacho Cases, but the referee appeared not to notice.

Madrid had relaxed after half-time and they were punished by a rare Sporting attack on 62 minutes as Jony charged into the area into the space left by Carvajal and squared for Lopez, who tucked home from six yards.

Sporting fans found their voice as their side began to have some control of possession.

Zidane introduced James Rodriguez - again left out of the starting line-up - and Mateo Kovacic, though neither had much of a chance to impress as Madrid coasted through the closing stages.