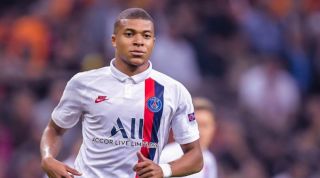 Mbappe is widely regarded as one of the best talents in world football and his form for both Paris Saint-Germain and France reflects that.

The 21-year-old has scored 25 goals and provided 16 assists in all competitions so far this season.

Since his move from the principality of Monaco to the French capital, he has thrived in the spotlight - establishing himself as a star player.

A host handful of elite European clubs are said to be vying for Mbappe's signature in what could be one of the most expensive transfers of all time.

Real Madrid have long been linked with a move for the French forward and Zinedine Zidane is believed to be a huge admirer.

Mbappe's recent post in the Players' Tribune was a letter to young footballers like himself and in it, he reveals an encounter with Zidane when he was just a young teenager.

"Right before my 14th birthday, I got an incredible surprise," Mbappe wrote.

"My father received a call from someone at Real Madrid, inviting me to come to Spain for a training session over the holiday break.

"It was a shock because they actually told my father, 'Zidane would like to see your son.' At the time, Zizou was the sporting director. Of course, I was over the moon. I was desperate to go."

Mbappe tells of how his chauffeur from the parking lot to the training pitches was a surprise.

"I will never forget the moment that we arrived at the training center from the airport," he explains.

"Zidane met us in the parking lot by his car, and it was a really nice car, of course. We said hello, and then he offered to drive me over to the field for training. He was pointing at the front seat, like, 'Go on, get in.'"

"But I just froze and I asked, 'Should I take off my shoes?'

"Hahaha! I don’t know why I said that. But it was Zizou’s car!

"He thought that was really funny. He said, 'Of course not, come on, get in.'

"He drove me to the training pitch, and I was just thinking to myself, I am in Zizou’s car. I am Kylian from Bondy. This is not real. I must still be sleeping on the airplane.

"Sometimes, even when you are really living something, it feels like a dream."