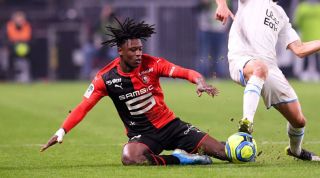 Casemiro has been a key figure at the base of Real Madrid's midfield and is heavily relied upon by the manager Zinedine Zidane.

The Brazilian has racked up 3,120 minutes in 35 games so far this season and this kind of output is seen as unsustainable.

As a result, Los Merengues are said to be looking to bring in a player who can relieve Casemiro of his duties now and then.

Anytime the 28-year-old has dropped out of the side, Madrid's performances have suffered.

Zidane has experimented with Fede Valverde taking up Casemiro's role, but it became clear that the Uruguayan is better suited to a position further up the pitch.

Toni Kroos, despite his vast experience, also struggles to successfully cover all facets of the defensive role as he lacks the positional discipline Casemiro has.

Real Madrid do have a potential future solution coming through their youth system in the shape of Antonio Blanco.

It's thought that his strength, ability in possession and astute tactical awareness are the perfect ingredients for the role.

However, the 19-year-old has barely played any first-team football and the coaching staff are supposedly reluctant to promote the player just yet.

An external option would be to dip into the transfer market and Madrid have targeted Eduardo Camavinga, according to Marca.

The Rennes midfielder is just 17, but has already played 25 matches in Ligue 1 this season and is catching the eye.

It's reported that the youngster is attracting interest from a host of top clubs across Europe.

Real apparently believe that Camavinga could be the perfect back-up for Casemiro and may well end up replacing him before long.