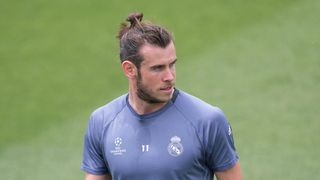 Isco has been named in the Real Madrid starting XI for the Champions League final against Juventus, with Gareth Bale among the substitutes.

Reports in the build-up to kick-off had suggested the Wales international would be handed a shock start, despite having not played for six weeks since aggravating an ankle injury in April's Clasico defeat to Barcelona.

Bale had said during the week he was "not 100 per cent" fit, admitting he may have rushed back from ankle surgery he underwent in November.

And Zinedine Zidane has indeed opted against starting him in attack alongside 'BBC' strike partners Karim Benzema and Cristiano Ronaldo, meaning Isco plays with Bale settling for a place on the substitutes' bench.

The other major selection dilemma for Zidane came at right-back with Dani Carvajal getting the nod over Danilo.

Carvajal has been out since the start of May with a thigh injury, but starts in defence along with Sergio Ramos, Raphael Varane and Marcelo.

Casemiro, Luka Modric and Toni Kroos make up the midfield three, while James Rodriguez does not even make the bench, fuelling speculation he is set to leave Madrid at the end of the season. Keylor Navas is in goal.

Juventus named their expected starting line-up, with Sami Khedira fit to play against his former club after shaking off a calf injury.

All eyes will now be on the opening stages of the match to see whether Massimiliano Allegri lines up in a 4-2-3-1 formation or a 3-4-3.

Alex Sandro and Dani Alves get the nod, with the latter an option to play either on the wing or as a wing-back, depending on the formation Allegri deploys. Veteran defenders Giorgio Chiellini, Andrea Barzagli and Leonardo Bonucci play in front of goalkeeper Gianluigi Buffon.