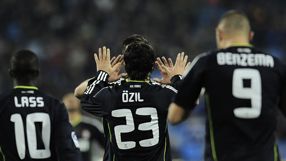 The Portugal forward missed his first league game of the campaign with a muscle strain, depriving Jose Mourinho of his leading scorer. Ronaldo has netted 27 league goals this season.

French striker Benzema is starting to find his feet in Madrid 18 months after moving from Olympique Lyon and his two goals in the 3-1 victory made it six in his last five games.

"He hasn't been here long. It was the first time he had left his country and his home. Not everyone adapts at the same speed.

"We knew we had a great player with him and day-by-day he is showing more determination."

The 23-year-old's continued failure to adapt to his new surroundings was one of the reasons for Real taking Emmanuel Adebayor on loan in January to help cover for the injured Gonzalo Higuain but Benzema has risen to the challenge.

Since Adebayor arrived from Manchester City to compete for Benzema's place, the Frenchman has shown a greater hunger to work for the team and his scent for goal has returned.

"I feel better than I did before," Benzema told reporters. "I am a different player, I feel well physically and inside my head. Mourinho has worked a lot to get my head straight and now I feel very good."

The other player hailed by Valdano was Germany midfielder Ozil, who set up the opener in the 23rd minute at the Sardinero, playing one-twos with Benzema and Adebayor before bursting into the area and squaring for the Togolese to score.

"He is the type of player that even our rivals enjoy," Valdano added. "I am sure he is going to be the symbol of Madrid for the next decade."

Ronaldo has been laid low for 10 to 15 days but Valdano showed that although out of sight he was not out of mind.

"We didn't play well because Ronaldo wasn't here," the Argentine said. "If he had been here the result would have been much more favourable to us. He is indispensable for us."