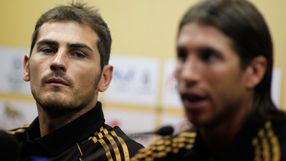 Captain and goalkeeper Iker Casillas, forward Cristiano Ronaldo and defenders Sergio Ramos and Alvaro Arbeloa all spoke to reporters after training this week, prompting the headline "Is the iron curtain falling?" in Marca sports daily on Friday.

It is a shift away from the long-standing policy of only having Mourinho or his assistant Aitor Karanka answering questions in set-piece news conferences, apart from those at least one player is obliged to give the day before Champions League matches.

The lack of player news conferences contrasted sharply with their arch rivals Barcelona, who make team members available after nearly every training session.

Real president Florentino Perez is seen as the architect of the change after he told journalists at last month's Christmas lunch that the club's media relations needed improvement.

The construction magnate, who is up for re-election later this year, may also be concerned about the impact Mourinho's combative style is having on the club's image and is seeking to dilute his influence.

Marketing experts told Reuters last month the Portuguese's repeated accusations of refereeing bias and several episodes of unsporting behaviour had been damaging to Real's traditional image of chivalry and being 'the club for all'.

Arbeloa played down the importance of the news conferences on Friday, saying that he believed the Real fans knew the opinions of the players.

"We have a lot of matches during the year and I think that in the mixed zones almost every day we have stopped to talk, if not one player then another," the Spain international said.

"I believe that the Real fans know what their players think," he added.

"The news conferences have been decisions taken by the club and I imagine with the agreement of the coach. We are delighted to come out here and answer your questions."

A sign of how sensitive Real are about the issue was their angry reaction to a newspaper report this week that said it had commissioned a survey of members that included the question "do you think the coach's attitude is damaging to the club?"

According to the report in As sports daily, members were also asked who should replace Mourinho if he left and were given a list of alternatives that included Chelsea manager Rafa Benitez, Arsenal's Arsene Wenger, Paris Saint-Germain coach Carlo Ancelotti and Germany's Joachim Low.

"Real Madrid C. F. strongly denies having requested any survey of the opinions of the club's members about the coach or any member of the squad, or of any possible names of coaches or players who might join the club," Real said in a statement on their website on Thursday.

"Furthermore, it is most unlikely that any company would have access to the contact details that would be necessary to carry out a survey of the club's members, and so any sample would not be representative," the statement added.