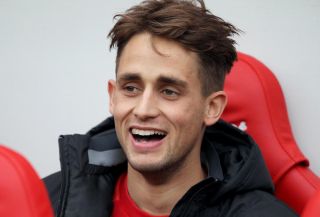 Real Sociedad climbed to third in the LaLiga table with a 1-0 victory over Real Valladolid.

It was a game of few chances, with the visitors not managing an effort on target until second-half injury time.

Sociedad only had four but one of those in the 60th minute saw Adnan Januzaj head in Mikel Oyarzabal’s cross.

The win lifted the Basque side above Atletico Madrid, Sevilla and Getafe and to within 10 points of Real Madrid ahead of the Clasico against Barcelona on Sunday.

In Germany, Hertha Berlin staged an impressive recovery from three down to draw 3-3 against Bundesliga strugglers Fortuna Dusseldorf.

Fortuna looked set for a victory that would have lifted them clear of the bottom three when they chalked up a 3-0 lead at half-time.

They were two up inside 10 minutes through Kenan Karaman and Erik Thommy, and the former added a third in first-half injury time.

But the game turned in the 64th minute when Thommy scored an own goal, with Hertha grabbing a second two minutes later through Matheus Cunha.

The comeback was complete in the 75th minute when Krzysztof Piatek picked himself up to score from the penalty spot after he had been fouled by Florian Kastenmeier.

Hertha came agonisingly close to taking all three points when Cunha hit a post in the 90th minute.

In Ligue 1, second-placed Marseille returned to winning ways with a 3-2 victory over relegation-threatened Nimes.

OM saw a 14-match unbeaten run come to an end with defeat by Nantes but Dario Benedetto’s hat-trick earned the points against Nimes.

The hosts took a shock lead through Zinedine Ferhat in just the fifth minute but Benedetto levelled matters shortly afterwards and put Marseille in front before half-time.

His third in the 68th minute gave the visitors breathing room, and they held on despite Lucas Deaux pulling one back in injury time.