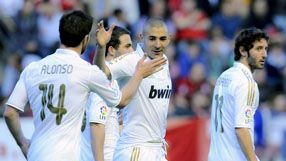 Jose Mourinho's men had no time for sympathy as they won their quarter-final first leg 3-0 in Cyprus last week, all but securing a semi-final place and ending tiny APOEL's valiant first foray into Europe's elite club competition.

The Cypriots failed to muster a shot on Iker Casillas's goal in front of their own fans, and will face an onslaught from three strikers in rampant form at the Bernabeu.

Portugal's former World Player of the Year Ronaldo has amassed 47 goals in all competitions this year, and scored two and set up two more as Real routed Osasuna 5-1 in La Liga last Saturday.

French international Benzema opened the scoring in Pamplona with a sumptuous volley reminiscent of Marco van Basten's famous effort for Netherlands in the Euro 1988 final, and took his tally for the season to 28.

Argentina's Higuain bagged two and took his season total to 24 as leaders Real closed on the league title, six points ahead of Barcelona with eight games left to play and having scored 100 goals in their 30 matches.

Mourinho will have one eye on Sunday's league clash against third-placed Valencia and will probably use the occasion to rotate his squad.

APOEL will want to bow out of the Champions League with their heads held high, and will take some comfort from having held the Spaniards at bay for more than 70 minutes in the first leg.

They received a boost to morale with a 2-1 victory over bitter rivals Omonia Nicosia on Saturday, which left them second in the domestic league behind AEL Limassol.

"It is a very important win for us at a crucial stage of the league," APOEL coach Ivan Jovanovic said.

"We still have a long way to go, but I am pleased that my players responded the way they should. We had a tough week and we have another one ahead of us."

Jovanovic will have Sunday's game for the play-offs against Anorthosis Famagusta on his mind, but is likely to give his regulars the opportunity to play in what will probably be their final match in Europe this season.

Defender Marcelo Oliveira, whose early exit from last Wednesday's game was a major setback, will be sidelined for several weeks after tests showed ruptured knee ligaments.

Ivan Trickovski will also miss the game after breaking his arm during the first leg.