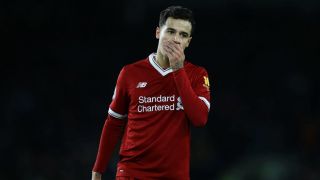 Barcelona have confirmed Philippe Coutinho will not be able to make his debut until at least the end of January due to a thigh injury.

The 25-year-old, who will finalise a move to the LaLiga leaders on Monday for a reported fee of €160million, has not played since December due to a muscle complaint.

The Brazil star passed his Barca medical on Monday but tests confirmed he will be sidelined for roughly 20 days.

He could be available for the visit of Deportivo Alaves on January 28 or, intriguingly, the trip to city rivals Espanyol, where he spent time on loan in 2012.