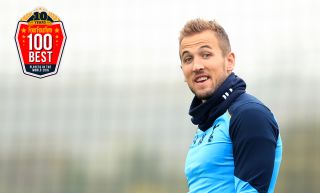 After scoring 21 Premier League goals in 2014/15 and earning a place among the FFT100 for the first time, England striker Harry Kane followed that up by bagging an additional 25 top-flight goals last term, and climbs 18 places in the standings.

But Kane is not the most prominent Tottenham man in the Top 100 this year, with Belgian centre-back Toby Alderweireld claiming that accolade at number 33.

Speaking to FFT on being named our best Premier League defender, the Spurs man said: “I am very honoured. I’ve tried to work very hard over the last couple of years to get to this kind of level, to improve myself and help the team.”

There are twice as many Spurs men in the FFT100 compared to 12 months ago, and although Son Heung-Min drops out, there’s a return for Hugo Lloris. The Frenchman placed at number 88 in 2014 before failing to make the cut last time.

And making his Top 100 debut is Dele Alli, who shone in his first season at White Hart Lane after arriving from MK Dons. Alli scored 10 Premier League goals in 2015/16, assisted a further nine and netted on his fourth appearance for England.

“He brought a lot to the team and it was not easy for him, but he did it brilliantly and we expect a bright future from him,” said Lloris. “If he keeps the same mentality and keeps working as he needs to do, he will have a great career.”

TEAMMATES
Both Hugo Lloris & @Dele_Alli make it into #FFT100. Here's the Tottenham skipper talking about his @SpursOfficial teammate... pic.twitter.com/0SiyoXUPvP