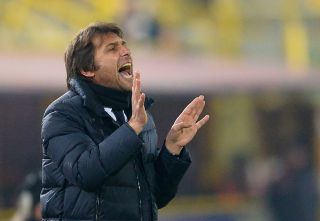 The Turin outfit could achieve the longest winning run of the season with an 11th straight victory against Cagliari on Sunday, while some have tipped them to break Inter's record of 97 points in a season set in 2006-07.

But Conte, who saw his team move eight points clear at the top of the Italian top flight with a 3-0 win over second-placed Roma last weekend, has stressed that consistency takes precedence over everything else.

"Records are made to be beaten, but it's the final goal that's more important as far as I'm concerned," he said.

"It's important for us to be consistent and we'll be in for test tomorrow at a tough venue.

"I think (Cagliari coach Diego) Lopez is doing a fine job. Cagliari are a tough, solid side.

"Cagliari have dangerous players up front and hit us on the counter attack when we played them last year. We'll have to remain alert."

The suspension of Andrea Barzagli after surpassing the yellow card limit presents Conte with a defensive dilemma, but the coach is certain he has the players to cover the Italy international's absence.

"Barzagli's suspended for tomorrow and we're evaluating our options in defence," he added. "(Martin) Caceres represents an excellent solution."