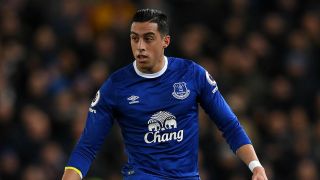 Everton defender Ramiro Funes Mori is targeting a pre-season comeback after returning to Merseyside to step up his rehabilitation from a knee injury.

Funes Mori suffered a torn meniscus representing Argentina in March and initially remained in his homeland to begin his recovery.

The centre-back has now returned to the club to take part in light training sessions and spoke of his frustration at being sidelined during the Toffees' run in.

Speaking to the club's official website, he said: "I was a little frustrated [because] of the injury, so it was good to be back home to clear my head

"Now I feel good to be back here doing my recovery.

"It's light training at the moment, balancing exercises with my knee and work with the weights. The physios are doing a great job to get me back as soon as possible. After the off-season, I'll be good."

The 26-year-old, who recently became a father for the first time, attended Everton's end-of-season awards night this week and thanked fans for the support he received.

"For me, the Everton people are very special," he added. "When I arrived here they showed me a lot of love. I feel happy to be back here."