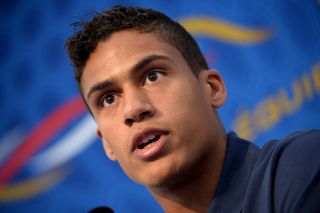 The 20-year-old came to prominence last season with a series of impressive performances, including man-of-the-match displays in Madrid's semi-final encounters with Barcelona in the Copa del Rey.

But his progress was curtailed when he underwent a procedure to repair meniscus damage to his right knee sustained against Espanyol in May.

Varane made his competitive return for Carlo Ancelotti's side in their 4-0 UEFA Champions League victory over Copenhagen, and is focusing on establishing himself in France's first-team plans ahead of the World Cup in Brazil next year.

He told FIFA.com: "When it (the injury) happened I told myself it wasn't a big deal, but it came as a big blow when I went to hospital and they told me what the problem was.

"It was my first serious injury. It wasn't until later that I started thinking about the World Cup and I told myself that I needed to come back fit, and fast too

"Zizou (Madrid assistant coach Zinedine Zidane) was important for me. He saw how impatient I was getting during the pre-season and he calmed me down, something he's pretty good at.

"It's only normal, though. If you don't have that desire, then there's not much point being on a football pitch."

Varane was handed his debut by former boss Jose Mourinho, and praised the Portuguese's impact on his fledgling career.

The Frenchman added: "He's a winner, a competitor, and he transmits that to his players.

"Mourinho kept his word. In the two years I played for him he always kept his word, and he also knew when to throw me in at the right time."