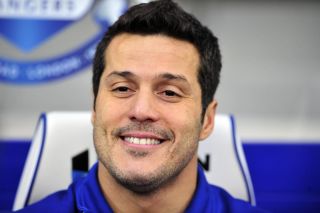 The drop down to the Championship has sparked a mass exodus at Loftus Road as the likes of Christopher Samba, Loic Remy and Park Ji-Sung have departed, either on loan or permanently.

Among the notable names still at QPR are goalkeeper Cesar and midfielder Joey Barton, with both the subject of speculation regarding their futures at the club ahead of Monday's transfer deadline.

Arsenal and Fiorentina have been linked with Brazil international Cesar – who is yet to feature this season – but he has so far remained at QPR.

"I can't believe that one of the big clubs in the world hasn't come in for Cesar," said Redknapp.

Barton revealed on Thursday that he had rejected the chance to join Crystal Palace, having previously been linked with Everton.

Redknapp is full of praise for the 30-year-old, who spent last season on loan at Marseille and has played in all four of QPR's Championship games this term.

He added: "Joey is here, playing well, and he's been exemplary, his behaviour and everything else, not a minute's problem.

"I've been delighted with Joey. It's the first time I’ve worked with him and he couldn't have done more.