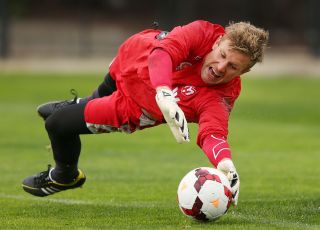 The Heart are yet to win after six rounds of the 2013-14 campaign, and produced arguably their worst performance yet in their most recent fixture, going down 2-0 at home to Sydney FC.

Next up is an away game against Newcastle Jets, who have banished their own early season gloom with successive victories over Adelaide United and Brisbane Roar.

Speaking to the media on Thursday, Redmayne was defiant in the face of the mounting scrutiny his club are being subjected to.

"Yeah, we are under pressure, but I really don't think the boys are feeling it," the goalkeeper said.

"If you look at our performances, we've been creating a lot of chances and looking quite solid defensively, so I think we take the positives from the games we've played and I think we can string a good performance together against Newcastle."

Redmayne acknowledged it was difficult to see supporters at AAMI Park last week brandishing banners calling for Aloisi to be sacked, and said the squad had to take their share of responsibility for the poor results.

"But we as players need to step up. It's not all the coach's fault. (But) we're not feeling any pressure at all.

"I can't speak for John, but I really don't think he is (feeling under pressure). We know the performances are good. We just need to string together a full 90-minute performance and the result will take care of itself."

A chronic lack of goals have been the biggest reason for the Heart's struggles - they have not found the back of the net since their 2-2 draw at home to Central Coast Mariners in Round 2.

Nevertheless, Redmayne claimed he has faith in the ability of his attacking colleagues to get the job done.

"I think once we do find the back of the net they're just going to flow in," he said.

"It's not from lack of chances. The goals are going to come."

This week's opponents the Jets are an example for the Heart to follow - it was Gary van Egmond's young charges in the firing line in the early rounds, but they are now up to third in the table.

And Redmayne admitted he was somewhat envious of the turnaround in the Hunter Stadium outfit's recent form.

"A little bit," Redmayne said, when asked if jealous glances had been cast in Newcastle's direction.

"It just shows, Sydney and Newcastle they were in a similar position that we are now, a couple of wins and they're right up there and talked about.

"We know it's not far away and you only need a couple of results (for it) to turn around. I don't think it's far away."

Redmayne could have Patrick Kisnorbo in front of him against Newcastle on Sunday - the experienced defender trained fully this week and is in line for a return to the starting XI.

But it will surely take more than the centre-back's inclusion to end the nightmare sequence of results and kick-start the team's troubled campaign.