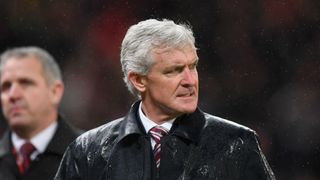 Under-fire Stoke City boss Mark Hughes is targeting a finish in the top half of the Premier League, despite his side languishing in the relegation zone.

Hughes has found his position under increasing scrutiny since Monday's dispiriting 1-0 defeat against Newcastle United at the bet365 Stadium, where large numbers of fans reacted angrily towards their manager at the final whistle.

Stoke have won two and lost seven of their past 10 top-flight matches and travel to Manchester United in their next Premier League game.

An FA Cup trip to League Two Coventry City is next on the agenda for Hughes, who is being kept going by memories of his first season in charge at Stoke in 2013-14 and urged supporters to remain calm.

"I've said many times before the only way noise or pressure goes away is if you win games," he told a news conference. "We had a weekend that tested us, where we would have ideally wanted a winning performance against Newcastle United.

"People clearly get a bit anxious and disappointed because of the importance of remaining in the Premier League. They should take comfort from the fact that good people are working for the club who will get the job done.

"We fell into the relegation zone in my first season here and ended up finishing ninth after picking up some momentum. That's what we will be looking to do again."

Hughes suggested he will not make wholesale changes for the trip to the Ricoh Arena, with centre-backs Ryan Shawcross (calf) and Bruno Martins Indi (groin) still sidelined.