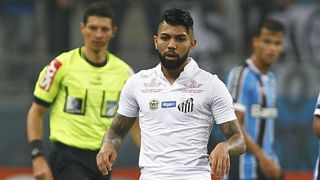 Santos have reached an agreement with Gabriel Barbosa to extend his contract until 2021.

Gabriel scored his first senior international goal for Brazil in the 2-0 friendly win over Panama in May, following it up with another strike in a 7-1 thumping of Haiti at the Copa America Centenario.

Even before appearing at the continental competition, the 19-year-old had been linked with the likes of Paris Saint-Germain and Borussia Dortmund.

Reports this week suggested Santos turned down a €30million bid for the striker from Chelsea.

However, the club have reached an agreement with Gabriel to extend his contract – initially due to expire in 2019 – at the Vila Belmiro for a further two years, though formal paperwork is yet to be signed.

"Santos announces that it has reached an agreement with striker Gabriel Barbosa and the club's legal department is in the process of drafting a contract so the number 10 is linked with the club until 2021," a club statement said.

Gabriel has long been seen as Neymar's successor at Santos, making his debut as a substitute in the Brazil captain's final match for the club before departing for Barcelona in 2013.

The pair will combine once again in the coming months having been selected in the Brazil squad for the Olympic Games in Rio.