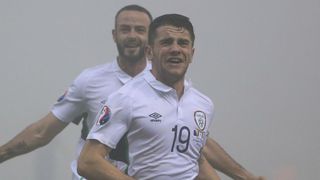 Robbie Brady has called on his Republic of Ireland team-mates to put in an improved performance against Bosnia-Herzegovina to seal a place in Euro 2016.

The Norwich City winger scored the opening goal of qualifying play-off first leg on Friday, although Edin Dzeko's late equaliser denied the visitors what would have been a priceless away victory.

That means the tie hangs in the balance going into the decider in Dublin on Monday, with the winners of the second leg guaranteed to progress.

A goalless draw would also be enough to send Ireland through, but another 1-1 draw would see the tie go to extra-time. A 2-2 result or any draw with a higher score would send Bosnia to the finals in France next year courtesy of the away goals rule.

"It is a good result away from home," Brady said to RTE. "We will take it back for Monday and put in a better performance and push ourselves through.

"It is not a bad result, but we could have prevented the goal and held out the last 10 minutes. We will give it our all. We know they have got a few players that can hurt us, so we need to keep a few players quiet on Monday and up our own game.

"We need to play a bit better but this is a decent squad and we have enough to get through. One leg is down and now we go again."

Ireland will give Shane Long (knee) every chance to prove his fitness, with manager Martin O'Neill saying he may use Robbie Keane, 35, from the start if the Southampton striker does not make it.

"It is a possibility," said the manager. "I wouldn't rule anybody out at all, absolutely not.

"Robbie Keane is our leading goalscorer and there is a reason why he is. But I can't turn the clock back. A 27-year-old Robbie Keane would be in the side, home or away."

John O'Shea and Jon Walters return from suspension for the pivotal contest at home, but Bosnia head coach Mehmed Bazdarevic is not giving up hope despite a disappointing result when his own side held home advantage.

"All is not lost," he said. "We didn't put on the kind of performance we aimed to and Dzeko's goal hauled us back into it.

"That gives us a better chance for rematch. We have the strength and quality, but we have to show much more of it to get a ticket to France."