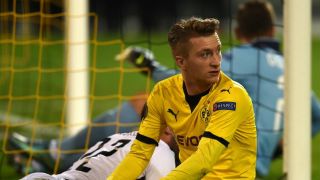 Borussia Dortmund forward Marco Reus wants the club's hierarchy to hang on to the likes of Mats Hummels and Ilkay Gundogan and end any uncertainty over their long-term futures.

Hummels' and Gundogan's contracts at Signal Iduna Park expire in 2017 but have both played key roles in Dortmund's revival under Thomas Tuchel along with in-form striker Pierre-Emerick Aubameyang.

The Gabon international recently affirmed his desire to stay at the club and Reus is eager to ensure other key players remain in Tuchel's squad over the coming years as well.

Reus - who committed his future to the club with a four-year deal in 2015 - told Welt: "If the club wants [to keep Gundogan and Hummels], then they will see to that.

"If you want to be on top, you have to invest in the team. We as players want to go to the very top and the club also wants that. There is no doubt that we can keep these players and bring in other good players. I am relaxed about this.

"We as a team will again get back to the top and the Champions League but, economically, there would also be other ways.

"Auba is very important to us. Many people may think he is just about style, fancy cars and glitter. But he's tremendously professional and he works very hard. He is a good example that people should not be assessed on face value."

Despite being one of Dortmund's best players in recent seasons, Reus' only trophies with the club have come from the DFL-Supercup - finishing runner-up in the Champions League final of 2013 while falling short in two DFB-Pokal finals.

"I hope [to win a title this season]. We are already often in Berlin for the German Cup final but unfortunately we have not managed in the past two years to bring home the trophy," he added.

"We will do our utmost that this time we succeed. In the Europa League, we have to show a different side. But we are Borussia Dortmund and one of the favorites even if the next opponent is a Champions League regular in Porto.

"Lost finals are like injuries - they do happen and I have to accept it. I can give my all as a player until the final whistle is blown. And if it has then not enough, you have to ask yourself: What can you improve?

"You have to draw conclusions and make it better in the next final."