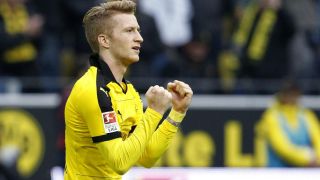 Marco Reus was on target as Borussia Dortmund beat Jeonbuk Motors 4-1 in a friendly clash in Dubai on Friday.

Thomas Tuchel's side despatched Eintracht Frankfurt 4-0 on Tuesday and they continued their warm-up to the second half of the Bundesliga season in comfortable style at the Zabeel Stadium.

Reus cut onto his left foot before drilling a low shot past Kwon Soon-tae from 18 yards out as Dortmund took charge of the encounter with just five minutes on the clock.

But they were left a little shocked when Jeonbuk snatched an equaliser, Lee Dong-guk powering a header beyond Roman Weidenfeller after Lee Joo-yong's clipped cross.

Dortmund regained their lead just before the break as Gonzalo Castro netted from close range, and the game was put beyond doubt early in the second half as Park Joo-ho drilled a shot through Kwon's legs following Reus' fine pass.

Park's timely intervention denied Jeonbuk a way back into the match as he slid to block the ball on the goal-line and Dortmund capped the win in the dying moments as Christian Pulisic steered home a low shot from close range.

Tuchel's side resume their Bundesliga campaign against Borussia Monchengladbach on January 23.