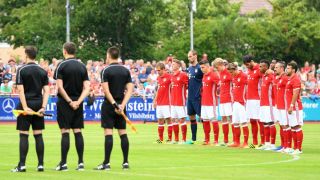 Goals from Franck Ribery, David Alaba and Daniel Hagler helped Bayern Munich to a 3-0 friendly win over Landshut on Saturday in a match that was overshadowed by Friday's shooting in the Bavarian capital.

The encounter at the Hammerbachstadion started with a minute's silence and both teams wore black armbands to pay tribute to the victims of the incident at a Munich shopping centre.

The Bundesliga champions created a number of early chances to break the deadlock and eventually went a goal up in the 34th minute when Ribery tapped home from close range after rounding goalkeeper Johannes Huber.

Alaba then doubled Bayern's lead shortly before the interval with a superb shot from 20 yards out into the top corner.

Young midfielder Hagler had the last word in the closing stages of the game, finding the net after a clever free-kick routine to make it 3-0.