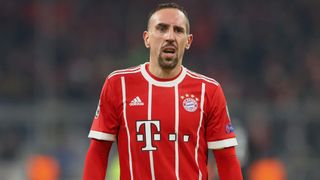 Bayern Munich winger Franck Ribery has vented at the "injustice" of his failure to win the 2013 Ballon d'Or, claiming he did not have the support of his own country.

Ribery finished third with 23.36 per cent of the vote, behind Cristiano Ronaldo (27.99 per cent) and Lionel Messi (24.72 per cent), despite having won the Bundesliga, DFB-Pokal, Champions League, UEFA Super Cup and Club World Cup with Bayern that year.

The prize was voted for by a journalist from each FIFA member federation, along with the coach and captain of the national men's team.

And former France international Ribery believes a lack of support in his homeland cost him the honour.

"The Ballon d'Or was difficult," he told Canal Football Club. "It was incomprehensible.

"I won all the trophies. I could not do any more.

"For me, it's like a theft, an injustice. I did not have my whole country behind me.

"I saw with my own eyes the French people who said it was for Cristiano.

"Did the Portuguese want Ribery or Messi to win? Impossible. Ditto for Argentina."