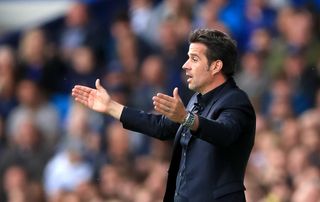 The Toffees boss accepts the 22-year-old needs the confidence boost goals give him and, after three in two games, hopes they will reap the benefit after the international break.

Richarlison, who celebrated wildly when he found the net in the midweek Carabao Cup victory over League One Lincoln, scored the first and last – either side of Alex Iwobi’s second in as many games – in a 3-2 win at Goodison Park in which the hosts had to twice recover from being pegged back.

“Richarlison is the type of player that needs good performances and if possible to win more confidence in the way he likes to play,” Silva said.

“The way he celebrated the last goal against Lincoln shows he needs these kinds of moments.

“Last season, he did all the pre-season for us. This season he did Copa America and after was on holiday and started the first game against Crystal Palace with 13 days working with us.

“Miracles we cannot do. He needs time like all the players to be in the best physical condition.

“He scored two really important goals for us. He will keep improving, for sure.

“We are talking about a fantastic football player and a fantastic boy. He is the spirit inside our dressing room.”

Another key component in the side’s make-up this season is Fabian Delph, a summer signing from Manchester City who brings much-needed experience to midfield.

He was the stand-out player in the centre of the pitch in a game which, after a manic opening spell of three goals in 12 minutes, descended into a scrappy affair for long periods.

“He showed very good performance but it is something I expect,” Silva added.

“Fabian is not in his best physical condition yet. He will improve more.”

A second win of the season lifted Everton to seven points and Silva, in his second campaign on Merseyside, believes progress is being made.

“This moment we have more points than last season in this period,” he said.

“If you look for the two teams we (beat) at home, last season we didn’t win these games at home.

“Those are good signs. Of course we want even more. The ambition is big inside this club. We keep working within our club to keep improving.”

Wolves boss Nuno Espirito Santo was happy with the way his side responded to going behind to a shambolic opening goal, Romain Saiss equalising quickly, and then finding another midway through the second half via Raul Jimenez.

“It was a tough game. We didn’t start very good. We should not be happy with the mistakes we made,” he said.

“When you score two times, I think we should do better defensively to sustain what we produce, but I am proud of the way the boys kept going.

“Every time you concede, you have to react, but I thought the reaction was very good. This shows the character we want to have.”