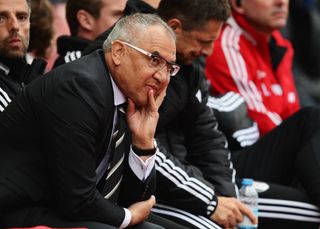 Magath became Fulham's third manager in the space of a year after replacing Rene Meulensteen in February, though he was unable to avoid relegation from the Premier League in 2013-14.

Life in the Championship has been no better for Fulham, who sit bottom of the table having lost all four games thus far.

Saturday's 5-1 drubbing at Derby County increased the pressure on Magath, who has only won three games since arriving in London.

And former Fulham full-back Riise - released at the end of the last season – went on Norwegian television to voice his concerns with Magath, who is notorious for his brutal training regimes.

"With his arrival, they've flushed everything [that club stands for] down the toilet. His methods are ancient," said the 33-year-old.

"Spoke to a few players after the Derby match. Once they returned to London, Magath ordered a team meeting at 10.30pm.

"Then the next morning [normally day off/restitution], players were ordered to run for one hour, then another training session at 2.30pm. It's not the way to get the boys going. And training methods are terrible."

Riise added: "All football sessions are 11 v 11, working on tactics. Interrupted every five minutes. It's a shame, but I fear for Fulham.

"Responsibility lies with Magath and the guys upstairs [directors]. They knew exactly what they were getting with this guy.

"I really like Fulham. It's a real family club with a great stadium, but with Magath everything gets flushed down the toilet."