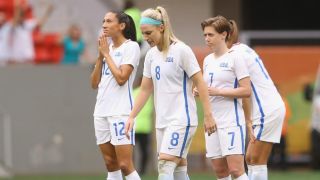 The United States lost on penalties to Sweden in the quarter-finals of the Rio 2016 women's football tournament on Friday, while hosts Brazil dramatically booked their spot in the final four.

Defending champions USA lost out to Sweden 4-3 in a shoot-out, after the match had ended level at 1-1 following extra time, marking the first time since the women's game was added to the Olympic programme that they have failed to make the final.

Sweden took the lead in the 61st minute, when Stina Blackstenius beat USA defender Julie Johnson on the counter-attack and slid a shot past goalkeeper Hope Solo.

USA equalised 13 minutes from time, Alex Morgan taking advantage of a loose ball in Sweden's area that ricocheted off the face of defender Jessica Samuelsson to score past Swedish keeper Hedvig Lindahl.

Morgan, though, went from hero to zero in the penalties.  She was first up for the Americans, only to see her shot saved by Lindahl. Solo kept the US alive with an excellent save from Linda Sembrant, but Christen Press launched her shot over the crossbar, leaving the door open for Lisa Dahlkvist to win it.

Penalties were also needed to separate Brazil and Australia in the quarter-finals, the former coming out on top 7-6.

After a scoreless 120 minutes, a thrilling shoot-out was decided by Brazil keeper Barbara, who denied Alanna Kennedy, sparking wild scenes.

The result spared Marta's blushes after the five-time World Player of the Year saw her penalty saved.

Elsewhere, there were 1-0 wins for Germany and Canada against China and France respectively.

PLAYER OF THE DAY

Matildas goalkeeper Lydia Williams produced a heroic effort, despite Australia falling short. Williams thwarted Brazil on numerous occasions in regulation and extra time, while she even denied Marta in the shoot-out to set up a potential match-winning penalty for the Aussies, which Katrina Gorry failed to convert.

QUOTES OF THE DAY

This was the full context of my comments today. Thank you . Losing sucks. I'm really bad at it. August 12, 2016

"We are very surprised they are out of the competition. Sweden didn't play well in the group phase but the favourites must confirm its position on the pitch," - USA's exit came as a shock to many, including Germany coach Silvia Neid.

After Press skied her effort over the crossbar, Dahlkvist placed the ball on the spot and coolly converted past Solo to eliminate USA, who had won the tournament in four of the five Olympics since women's football joined the program in 1996.

And then there were four. Tuesday will see Brazil and Sweden go head-to-head at the Maracana for a spot in the final, while Canada take on Germany in Belo Horizonte.