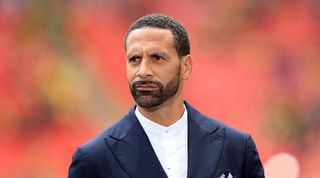 Rio Ferdinand believes the Premier League season should be cancelled unless a solution can be found soon.

The 2019/20 campaign has been placed on hold until April 30 at the earliest due to the coronavirus pandemic.

It is not yet clear whether the season will be completed at a later date or declared null and void.

And Ferdinand says he is edging towards the latter view, even though he acknowledged it would be hard on Liverpool.

Jurgen Klopp's side have opened up a 25-point lead at the top of the table as the club seeks its first league title since 1990.

“Times like this do push it home how important sport, contact and communication is when you are isolated and alone with your immediate family," Ferdinand told BT Sport.

“But we have to take into consideration football is just a game. As seriously as we all take it, the bigger picture is what is going on out in society.

“I’m sure in my own mind that if it’s not going to be an immediate fix in the next few weeks then the season needs to be voided and started again next season afresh.

“A lot of people like Liverpool fans will always say, ‘Oh that’s because you don’t want Liverpool to win the league’.

“Listen, if my team was in that situation I would think about people’s health and the wider society rather than my own gain.

"I think across the board, it’s much more clearer, black and white, and just void the season and start again afresh.

“But whichever way you go you’re going to be disappointing people and there’s going to be people that are more happy with the situation when you do it.

“So not everyone can win in this situation and that’s just a fact.”