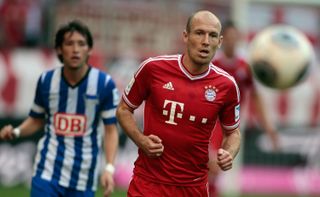 Kroos was replaced by Mario Gotze in the 24th minute of Saturday's match at the Allianz Arena, with Robben following him off two minutes later.

Robben's replacement – Mario Mandzukic – opened the scoring three minutes after coming on and doubled his tally in the second half, while Gotze was the other goalscorer for Pep Guardiola's side.

With five players already on the sidelines with injuries the addition of two more would have been a blow for Guardiola, however both players have been given the all clear and should be fit to face Hoffenheim next weekend.

Robben told the club website that his problem was "nothing serious, it's probably something to do with a nerve" following the win, and Kroos posted on his official Facebook page he was only withdrawn as a precaution.

"Hey guys wanted to tell you that the only replacement was a precautionary measure today," he wrote. "Had problems in the groin and if I had continued to play, it would have had a more severe injury.

"I hope as soon as possible can train with the team again. So do not worry."

Bayern already have Claudio Pizarro, Xherdan Shaqiri, Thiago Alcantara, Dante and Holger Badstuber on the sidelines, but were boosted by the return of Javi Martinez in Saturday's victory.