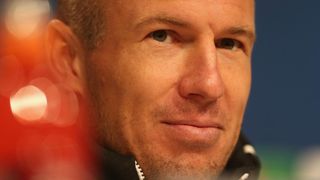 Bayern Munich veteran Arjen Robben said Anfield is his "worst stadium" ahead of the Champions League last-16 tie against Liverpool.

Bundesliga champions Bayern will travel to last season's runners-up and Premier League leaders Liverpool for the first leg on Tuesday.

Robben – who will leave Bayern at the end of the season – has some unhappy memories of Anfield from his time with Chelsea.

Chelsea were edged 1-0 on aggregate by eventual winners Liverpool in the 2004-05 Champions League semi-finals, while Robben and his team-mates lost on penalties to the Reds at the same stage of the tournament in 2006-07.

"I think, if you ask [about] the worst stadium for me, it's probably Liverpool," the 35-year-old Dutch winger told The Guardian. "You always have your favourite opponent and there always has to be a negative one."

Reflecting on the two semi-final defeats to Liverpool in Europe, Robben added: "At that time [Liverpool] were really capable of being this cup fighter team, also in the FA Cup or [League] Cup.

"In one or two games they could really live up to it and perform; just not the whole season, which was maybe too much. That was their biggest quality: they were there at the moment they needed to be there.

"Now I think it changed and they developed really well. The manager has done a great job. Last year they were in the Champions League final and at the moment they are top [of the Premier League]. It's a long, long time ago that they won the league and that's the one they're dreaming of."