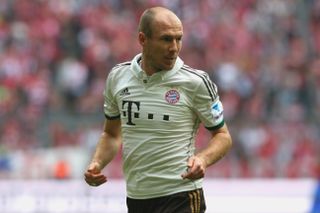 Reports in the French media indicate that the Ligue 1 champions are considering an approach for the 29-year-old, whose contract with Bayern does not expire until June 2015.

But, while the Netherlands international admits he is "honoured" by the rumours, Robben insists he is only concentrating on Bayern.

"It's always an honour when a big team shows an interest in signing you," he told Bild.

"But everybody knows that I am feeling very well at Bayern at the moment.

"I don't know anything about the rumour and I only want to think about playing football."

Robben joined Bayern from Real Madrid in 2009 and has been key to the Bavarians' recent success, scoring the winning goal in the UEFA Champions League final as the Allianz Arena outfit became the first German club to win the Bundesliga, DFB-Pokal and the Champions League in one campaign.

The former Chelsea man has made 15 appearances for Bayern this season, finding the net eight times and contributing nine assists.