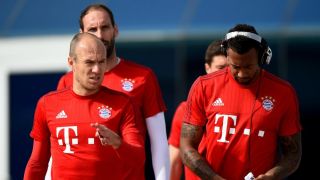 Bayern Munich head coach Pep Guardiola confirmed Arjen Robben and Jerome Boateng will not feature in the Bundesliga match against Hertha Berlin, adding that the Dutchman "will need a miracle" if he is to make the first leg of the Champions League tie with Atletico Madrid.

Robben has been out of action since the goalless draw with Borussia Dortmund on March 5 due to an adductor problem, while Boateng has not featured since the win over Hamburg in January because of a groin injury.

Both are slowly edging closer to a comeback, but neither will make the trip to Berlin on Saturday, with the Netherlands international also highly unlikely to feature against Diego Simeone's men in the semi-final first leg in Madrid on Wednesday.

"Boateng is not an option for the game against Hertha," Guardiola said at a news conference. "It's up to him to decide when he is ready.

"Robben is not an option for Hertha, either. He would need a miracle to be ready for the match against Atletico."

Robben himself, meanwhile, is optimistic about his recovery, but acknowledged he still needs a bit of time.

"We are taking things one step at a time," the winger told Bild.

"I don't know when exactly I will be back. I am hopeful I will make my comeback this season and I am on the right path."

Boateng could make his return against Atletico, but he is adamant he will not be taking any risks with Euro 2016 fast approaching.

"I am the one who decides when I will return. I want to be training at 100 per cent again first," the Germany defender told Bild.

"The first leg against Atletico is my objective, but we will have to wait and see whether that is a realistic goal. I do not want to take any risks. It's no good when I return and then get injured again, thus missing out on the most important matches.

"I never had any doubts about the Euros, but I obviously couldn't guarantee anything. I just need games to get back to my best."