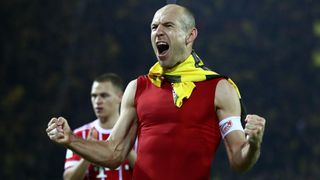 The former Netherlands winger agreed terms on a new deal last week and has now put pen to paper for the 2018-19 campaign.

It means that Robben joins fellow winger Franck Ribery and full-back Rafinha in staying on for next season, when new head coach Niko Kovac will take charge of the Bundesliga champions.

Robben joined Bayern from Real Madrid in 2009 and has won seven Bundesliga titles, four DFB-Pokals and the Champions League during his time at the club.

The 34-year-old will have the chance to collect a fifth Pokal medal if he is able to overcome an adductor injury in time for Saturday's final against Eintracht Frankfurt in Berlin.