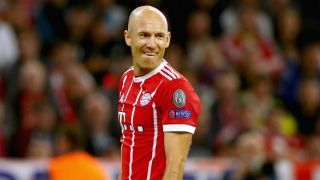 Arjen Robben says he has had no talks over a new Bayern Munich contract but is "relaxed" over his future.

The experienced winger's deal expires in 2018, by which time he will be 34, and there has been speculation he will retire rather than pen fresh terms.

The former Chelsea and Real Madrid man is yet to be approached by Bayern officials over an extension but he insists it is not on his mind at present.

"I am very relaxed," he told Sky in Germany. "I've not been approached by anyone yet and I am in no rush. I feel good and only focus on football."

Robben made his 100th Champions League appearance in Wednesday's 3-0 win over Celtic at the Allianz Arena, in which he set up Mats Hummels for his side's third goal.

The former Netherlands international, who retired from international football after his side's failure to qualify for the World Cup, was delighted with the milestone but is more interested in winning the trophy itself.

"It's something special," he said. "If it had not been for a few injuries, I could have made even more.

"I can be a bit proud about this. But it's not about records. I'd rather have another trophy."