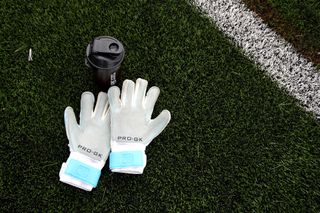 Robby McCrorie is focusing on improving game by game for Livingston rather than having one eye on challenging for the Rangers goalkeeping jersey.

The 21-year-old kept a clean sheet on his Ladbrokes Premiership debut in Wednesday’s victory over St Johnstone after swapping a loan spell at Queen of the South for Livi.

The Scotland Under-21 international had previous loan spells with Berwick and Morton and saw the latest move as an ideal opportunity to progress his career.

With Allan McGregor signed up at Ibrox until the end of next season, McCrorie is not getting ahead of himself.

“Obviously it’s the same league but to be honest you can’t look too far ahead in football,” he said. “I just need to concentrate on Livingston and go game by game and try to be consistent.

“Hopefully come the end of the season I can be in a good place.

“I must admit I’m very thankful to Queens, they gave me a chance of playing games every week. I loved it there but this was an opportunity for me, playing in the Premiership, that I couldn’t turn down.

“It’s a chance for me to learn even more. I want to test myself and Rangers were happy with it as long as I was happy with it. It’s hard for Queens but it was done respectfully.

“I’m happy with the start but there’s still stuff I can tidy up on during the game, small details. I will look to do that game by game and try to get better.”

McCrorie is following in the footsteps of former goalkeeping colleague Liam Kelly, who had a positive loan spell at Livingston before leaving Rangers to sign for the West Lothian club. QPR bought him halfway through his two-year contract.

“After everything was done, I gave him a wee phone call,” McCrorie said. “Liam obviously done great here.

“He told me what it’s about here. I got an inkling on Tuesday anyway, it’s a real tight-knit group, from the coaching staff too, everyone is in it together, and I think you can see that on the pitch.”