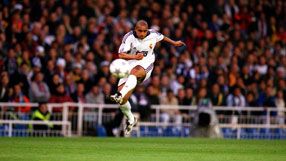 Roberto Carlos, who played 371 league games for Real between 1996 and 2007 and scored 47 goals, told Spain's As newspaper he had decided to leave his Turkish club Fenerbahce in December.

"I would be prepared to play six months in Madrid without pay," the 36-year-old said.

"From January to June and who knows maybe I could stay around a year more," he added.

The Brazilian has enjoyed a successful spell in Turkey, winning two Turkish Super Cups and maintaining his remarkable scoring record for a full-back, netting 11 times in 3 seasons.

However, he has decided against renewing his contract when it expires in December.

“It's my third season there [in Turkey], but I have decided I will leave in December. I would like to return to Brazil and play for a team there,” he said.

And the World Cup winner insisted he has unfinished business at the Bernabeu.

“It is very important for me to return to Real Madrid, of course I would like as a player, but if possible I would like to work here with children, young people and teach them everything I know," he said.

Former Madrid team-mate Zidane has returned to the club in an advisory role, with a view to a move into coaching.

And Real president Florentino Perez is believed to see a similar future for Carlos, with coaching muted as a possible addition to his on-field responsibilities.