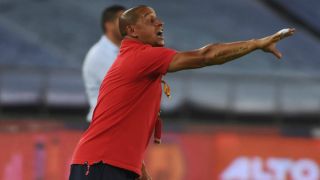 Real Madrid and Brazilian great Roberto Carlos said he would be interested in coaching in the A-League.

Regarded as one of the greatest left-backs in the history of football, 2002 World Cup winner Roberto Carlos has been without a coaching role since leaving Indian Super League outfit Delhi Dynamos in 2015.

Roberto Carlos was linked with a move to Australia prior to his departure from Delhi last year, having previously managed Akhisar Belediyespor and Sivasspor in Turkey, while he also worked for Russian side Anzhi Makhachkala.

While happy in his role as an ambassador for LaLiga giants and European champions Madrid, the 43-year-old – winner of four La Liga titles and three Champions League crowns during his illustrious playing career in the Spanish capital – is open to working in the A-League.

Asked about a move to Australia, Roberto Carlos told Omnisport: "Why not? Everything is possible in football and obviously it will be a new experience.

"At the moment I am learning here at Real Madrid but of course one day if there was the right opportunity I would certainly consider it.

"I would like to return to being a manager. Now as I am an ambassador for Real Madrid in Asia and Oceania and I am very happy with regards to working for my club.

"But obviously I do miss the day-to-day on the pitch and when I have my license I want to learn more about work on the pitch here at Real Madrid and then become a manager again."