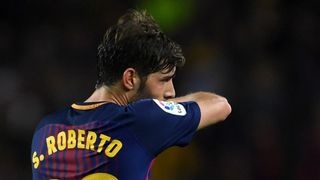 Sergi Roberto was surprised not to be selected for the World Cup and hopes to force his way back into Spain contention under new coach Luis Enrique.

Former Barcelona coach Luis Enrique was appointed by Spain after a disappointing Russia 2018 campaign under Fernando Hierro, who took charge after Julen Lopetegui's shock sacking on the eve of the World Cup.

Although initially considered a midfield player, Roberto has carved out a niche as a right-back for Barcelona, making 30 appearances in LaLiga last term.

But despite being the first choice full-back for double winners Barca, Roberto has only won three caps for Spain, with Real Madrid's Dani Carvajal and Alvaro Odriozola - who has joined Los Blancos from Real Sociedad - preferred in the World Cup squad, much to the 26-year-old's surprise.

"I sincerely thought that I would go to the World Cup," Roberto said to reporters. "But the coach decided on other players, and I had no choice but to watch the tournament on television.

"For me Luis Enrique was very important, he was the one who gave me my Barcelona B debut and the one who picked me regularly in the first team.

"If I get back into the national team it will be very good."

Valverde has indicated he wants to strengthen Barca's midfield following the departures of Andres Iniesta and Paulinho, although Arthur has been brought in from Gremio.

Roberto, though, is happy to continue playing at right-back if there is not an available spot in the centre of the pitch for the 26-year-old.

"The market is always open, and I don't decide which positions they sign players for," he added. "I have always said that I will play where they tell me, I am open to anything to help the team.

"I've not talked to the coach, but I played in midfield in the last pre-season and started the campaign in midfield, but then settled on the right side."