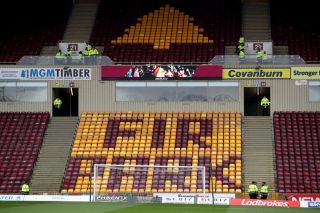 Motherwell manager Stephen Robinson believes they have turned a corner despite going a seventh game without a win.

Robinson’s side moved back up to third in the Ladbrokes Premiership after holding Hamilton to a goalless draw following striker Christopher Long’s 37th-minute red card.

Long put his team in trouble after following up a booking for kicking the ball away with a risky challenge on David Templeton.

But Motherwell goalkeeper Mark Gillespie was largely untroubled after the red card and the visitors had some decent chances to snatch a win in the closing stages.

Robinson, who kept two up front after the sending-off, was encouraged by his team’s spirit on the back of a three-goal comeback before their midweek penalty shoot-out defeat against St Mirren.

Well now have a swift chance to avenge that William Hill Scottish Cup exit when they host the Buddies on Tuesday looking to utilise their game on hand on fourth-placed Aberdeen.

Robinson said: “The fans saw a team full of desire, organised and back to their defensive best after the St Mirren….excitement, let’s say.

“We are really positive about that performance and the second half and extra-time against St Mirren. We feel as if we have turned a corner and we will turn them into wins.

“It takes us back to third and an opportunity to go four points clear against a very good St Mirren side, we are taking nothing for granted. But it’s an opportunity at home.

“I believe the tide has turned. We have got boys playing who are 80 per cent fit with illnesses and injuries – it does take its toll on the squad but it shows the character of the squad.

“It’s been a tough week in terms of extra-time mentally and physically and we just have to rest up and make sure we are ready to go again.”

Hamilton had a bench full of academy players with Lewis Smith, Andy Winter and Reegan Mimnaugh all coming on and they ultimately could not find a way through the visiting defence.

“You saw my team, you saw my bench – I’m decimated,” Rice said. “That’s all I’ve got available.

“Scott McMann was down to play and he called off ill. We have four attacking players out.

“We just tried everything we could with what we had available. The boys responded brilliantly. They gave it everything.”