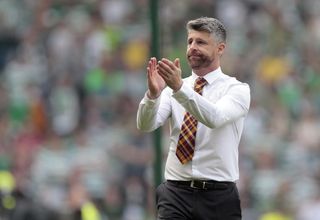 Motherwell manager Stephen Robinson insists his team selection for the final game of the campaign will not be influenced by supporters.

The Fir Park club’s hopes of overtaking St Johnstone to claim seventh place in the Premiership evaporated in the Perth sunshine, with Scott Tanser’s penalty and a Murray Davidson goal easing Saints to a deserved victory.

Well will bring down the curtain in front of their own fans when they face Livingston on Saturday and the Fir Park manager believes his squad merit cheers, not jeers, after a small section of the travelling support rounded on Rangers-bound Jake Hastie.

They have taken exception to the winger’s decision to pen a long-term deal at the Ibrox club.

But their chants cut no ice with manager Robinson, who introduced the 20-year-old from the bench late in the contest.

“He’s a super boy and I think the world of him,” said Robinson.

“If I think Jake is going to win the match for me then I’ll put him on.

“We were 2-0 down and had a boy on the bench who has scored seven goals for us.

“There’s a lot of players other than Jake Hastie not staying at the football club and I’ll use any player available to me until they’re not involved with Motherwell anymore.”

Motherwell were denied a first-half penalty when Tanser appeared to fend off Gboly Ariyibi’s strike with his arm.

But Robinson declined the opportunity to point the finger of blame at referee Colin Steven, who was handling his first match at the top level.

“I’m not going to sit here and blame referees,” he said. “We have to look at ourselves.

“We played a lot of decent football but in the second half St Johnstone had a little bit more experience and know-how to win the game.”

Perth boss Tommy Wright admitted he was relieved to see English defender Tanser ram home a first-half penalty – his first in professional football – after seeing five squandered by his team this term.

“If we had missed another one I would have been away up the tunnel,” said Wright.

Man of the match Davidson rounded off a flowing move minutes after the break and there was no way back for the Steelmen.

“I think that was Murray’s best performance of the season,” said Wright.

“He dovetails well with Liam Craig and together they stopped the likes of David Turnbull imposing himself on the game.

“Once we missed out on the top six it was important we finished in seventh, so the players deserve credit for that.”